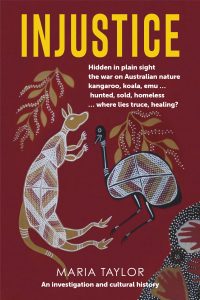 What happened to the globally-beloved kangaroo, koala and other Australian indigenous animals under the beliefs and traditions of colonialism? How did their fate during 200 years of nation building become a fugitive drama of dispossession and disrespect – and what is today’s little known and blood-stained legacy in a world rapidly losing its biodiversity?

Documentary journalist Maria Taylor, author of Global warming and climate change: what Australia knew and buried, unveils a cultural history of warfare against Australia’s other indigenous inhabitants. Her investigation exposes David and Goliath battles for the wildlife and nature of Australia – with worldwide echos. Here also are paths to reconciliation and sharing that marry the ecological and the economic.