Ship of Death by Jane Smith 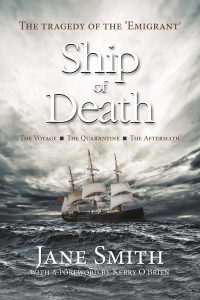 When 276 poor British emigrants sail away from Plymouth on the ship Emigrant in April 1850, seeking a better life in Australia, they know nothing of the ordeal that lies ahead. For four terrible months at sea they endure cramped and squalid conditions, insufferable heat, bitter cold … and a mounting death toll from the dreaded disease that rages through the ship: typhus.
When the Emigrant arrives in Moreton Bay, the nightmare continues. For three long months in quarantine at Stradbroke Island, the immigrants’ hopes are raised and dashed, and raised and dashed again.

Impeccably researched and poignantly told, Ship of Death unfurls the true saga of the ill-fated voyage, quarantine and aftermath. For the first time, this stunning book reveals the human stories of some key players in the drama – their backgrounds, their suffering, and their fates – and in doing so, brings to life a remarkable journey common to many of Australia’s early settlers.
​
Their stories are tales of hardship, resilience, courage and despair.